Tuesday we were back at Spanish class.  A lot more verbs to practice!  And conjugate!  It is getting into our heads...slowly.  Our teacher is nice, patient and she is getting us to use more Spanish in our conversation.

After class we went to the grocery store to stock up for the week.  We are used to the stores now.  We know where to find stuff, and we know pretty much what we like.  The grocery store run is always a lot of work.  First, we walk ten minutes to the store.  Do our shopping.  Then, we take the taxi back to the house. It doesn't sound like much but, everything is more of an effort.  If we took the bus we'd probably never get our cold stuff home before it melted or was ruined.

Wednesday we were out in service again.  We went to an area know as Sutiaba.  There is a Kingdom Hall there, Spanish only, and an outdoor market where you can buy lots of fruits and veggies.  They also have an area where the fisherman bring in the catch from the night before.  We were on the other side of the street from the market, in a neighborhood looking for people that speak English.  I was able to find two nice women that speak English.  I will be going back to visit them again.  Levi spoke to a man that spoke English, he was in a building that was a church/butcher shop.  We thought that was an interesting combination!

Wednesday afternoon we were invited to Ashlee's house for a little girl party.  We thought it would be nice to get the little girls together to play before the Larsons leave next week.  Ashlee decided we would have a kiddie pool party.  The girls loved it!  She also made some homemade peanut butter cookies, with homemade peanut butter.  The other moms brought some other snacks and I brought some homemade limeade mix.  Everything was delicious!

A little fun in the pool. 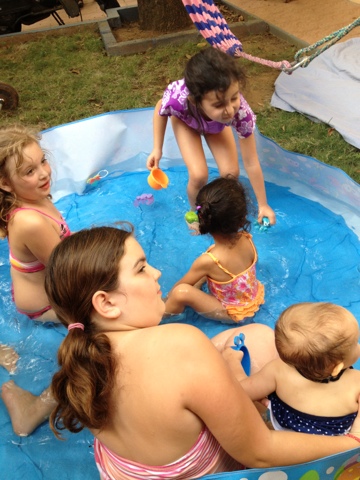 Look at that crew!  They were having fun! 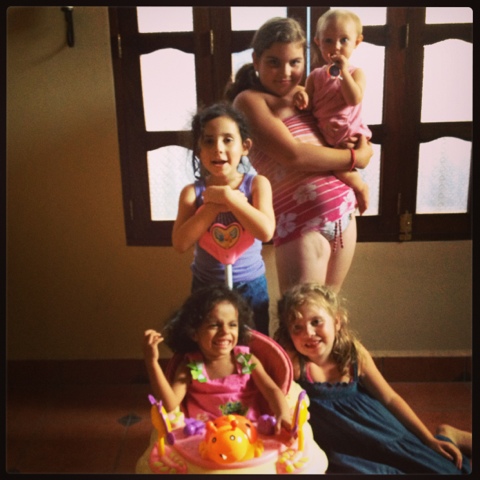 And, here's with the moms (and Brie.)  We were having fun too! 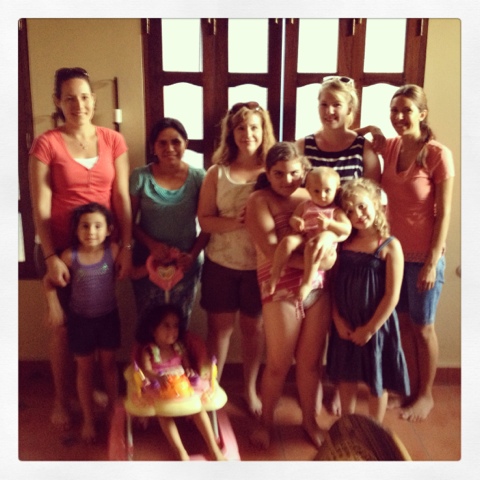 Thursday it seems we usually spend the day doing laundry and studying for the meetings.  It's also the day we get to sleep in a little if we feel like it. :-)

Friday we were back in service.  We were on our own that morning but, we had a few return visits that we needed to make.  We were able to find Levi's return visit, a young man that works in a little store.  I told you about him a few weeks ago.  He's a very nice young man and he's very eager to learn more about the Bible.  I'm very proud of Levi being able to teach this young man. Unfortunately, my return visit, a young woman named Darlene, was not at home when we called.  I'll try her again next week.

We've been trying to go to a hostel nearby, to go to their pool.  When we tried last week we found out that when the hostel is full of guests they only allow one family, per day, to use the pool.  Since we were in a lounging kind of mood, and we ALL liked the idea of being able to get in the pool, we called to see if the pool was open.  Yes!  After lunch we got our stuff and took the bus to the hostel.  It's called Hostal Mariposa, run by a French family with one little girl.  It was a lovely way to spend the afternoon.  Josie had a blast.  Especially after some of the kids came out to play in the pool.

Here's my view when I was lounging. 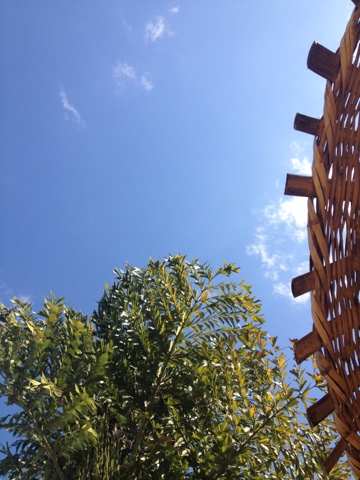 Another view.  Those are little cabanas for guests.  It's a very nice atmosphere at this hostel. 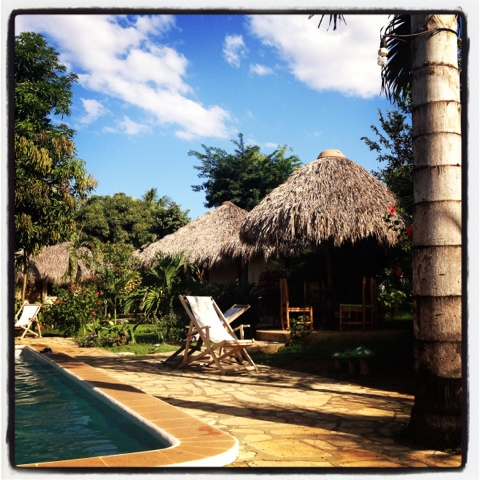 And, here's a few of Josie enjoying the pool.  The incredible flying Josie! 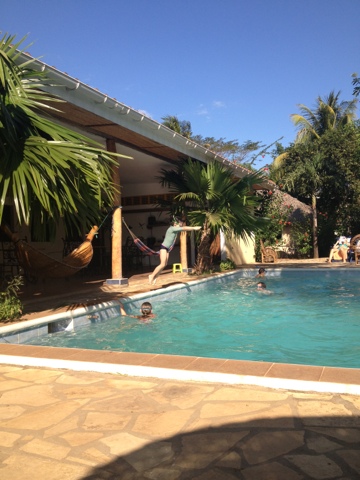 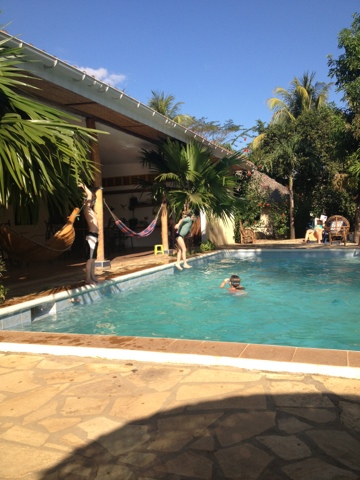 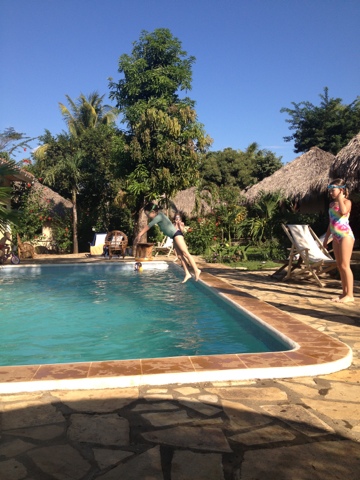 I really like this pic of the San Cristobal volcano.  We took it on the walk back home after the pool. 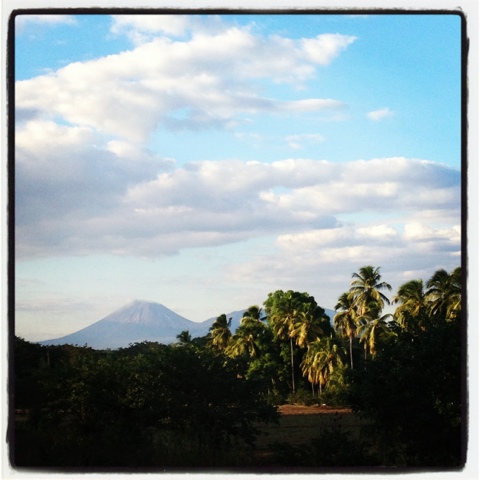 Levi only stayed for a short while at the pool.  There was another soccer game on Friday afternoon.  Lee walked up the street to our friend M and M's house with Levi.  There's another young man, named Taylor, here visiting from Tennessee.  The two boys were going to meet some of the other friends and head to the soccer game.  They came back to the house after the game to eat dinner with us.  We had a nice meal of fish, shrimp, black beans and rice.

I was feeling especially tired on Friday.  I thought it was just a combination of the heat and dust, and walking so much.  Saturday was when I felt I was actually sick.  We didn't accomplish much that day.  Lee had to work on his talk for Sunday.  We went to get some dinner at a little restaurant called Tip-Top.  It's a little like a KFC, not our favorite but it was okay.  Then we got a few drinks at the store.  By the time we got home I had a little bit of a fever and went to bed.  Ugh!  Don't you just hate that feeling of being sick in the summer?  That's what it feels like.

Sunday was the meeting.  Lee had the public talk in the Leon English congregation.  Unfortunately, I stayed home since I was still feeling sick.  Lots of sleep for me.  Lee said the talk went well.  Afterwards, Lee and the kids went to a local family's home for lunch.  They said it was good.  The brother shared his experience about how he became a Jehovah's Witness.  Lee said it sounded like a yearbook experience.  Maybe he'll share it with you...

So, that was our week.  A great start, a not so great finish with my being sick.  I'm just hoping no one else gets sick.

Much love to you all!
XXXXOOOO
The Bachman Family